A Recap of the NCRA Legislative Boot Camp 2018

What a great Legislative Boot Camp 2018!  Following a somewhat different format this time (so I understand, as this was my first time) boot camp involved both prepping for meetings with legislators on Capitol Hill, and sessions with informative and thought-provoking speakers.

Marcia Ferranto, NCRA Executive Director and CEO, Chris Willette, NCRA President, and Matthew Barusch, NCRA State Government Relations Manager, all spoke about the state of court reporting both on a national and state level, and reporter certification as an important tool for keeping the profession viable.  National statistics show that certified reporters make more money than non-certified reporters, and certification brings consistency and respect to the profession.

NCRA has a PAC that supports candidates and legislative initiatives that support reporters on Capitol Hill.  Individuals can contribute up to $5,000 to the NCRA PAC.  To be an advocate for certification in Maryland, there needs to be state membership consensus to start, then find a legislator in Maryland that would advocate for the profession, then draft language to introduce legislation.  Groups that have a shared interest in the quality court reporting services – i.e., Trial Lawyers Association, Bar Association, etc. – are places to start to drum up support for a certification requirement.  With the Trump administration emphasis on technology and technical education, it presents a new opportunity to push for more court reporting education, training, and certification.

James Cool, who is an attorney and also a former president of the Arizona Court Reporters Association, gave an eye-opening session about ER and how it has affected Arizona.  I found him particularly informative, as he presented the point of view of both a reporter advocate and a non-reporter realist (attorney).  He was blunt about the fact that while court reporters are passionate about their beliefs that ER is not an effective means to capture the record, that non-reporters (i.e. court administrators and state government officials) just don’t see it that way; that money is the root of wanting to get rid of court reporters in courts; and that the way to advocate for a live reporter is to educate people on the fact that court reporters are not only trained in how to use a steno machine, but they have education relating to medical terminology, vocabulary, grammar, and technical terminology; that the educated court reporter is a much better alternative, for a WRITTEN record,  than electronic recording.  Because we don’t have much argument against the fact that the technology of video and audio recording today makes a great oral record, but we do have an argument that a readable transcript can really only be produced by an educated court reporter being present.  He made the point that while court administrators and legislators believe that replacing reporters with ER is a money-saving tactic, that in reality the mistakes and do-overs necessitated by faulty recording equipment and/or operators is not cost effective.

We then split off into groups and prepared for a mock hearing in front of pretend legislators.  An intense and hectic process, but very educational, and a great way to work with reporters from all over the country. We made our presentations in seven groups about the need for a re-funding of a temporary grant for court reporting schools in order to train realtime writers to do closed captioning.  While it was a hypothetical scenario with hypothetical names and places, it prepared us for our one-on-one presentations to state senators and representatives on the Hill the following day regarding a similar issue.

I met with legislative directors and assistants from Senator Ben Cardin, Senator Chris Van Hollen, and Representative John Delaney’s offices.  The goal of all of the court reporters associations’ state leadership meeting with their senators and representatives was to raise awareness for the Training for Realtime Writers grant, which is a part of the larger Higher Education Act of 2009.  This grant is funded every five years, so it is up for re-funding in 2019.  It grants $1 million each year for five years to court reporting schools around the country in order to train quality realtime writers to provide closed captioning.  The Telecommunications Act of 1996 is a federal mandate that all media outlets in top 25 markets must provide quality captioning, and this grant is in furtherance of that Act.

My takeaway from the boot camp and the meetings on Capitol Hill was pride in my profession.  While these types of events are inspiring and always give me an energy boost for court reporter advocacy, I was really struck by how passionate all of the other reporters in attendance were, and how receptive folks on the Hill were to hear about court reporting and the profession in general.  While I realize these elected officials and their staff are paid to listen to their constituents, I couldn’t help but feel like I was playing a role (however small!) in the governmental process by making my voice heard.  It was truly invigorating. 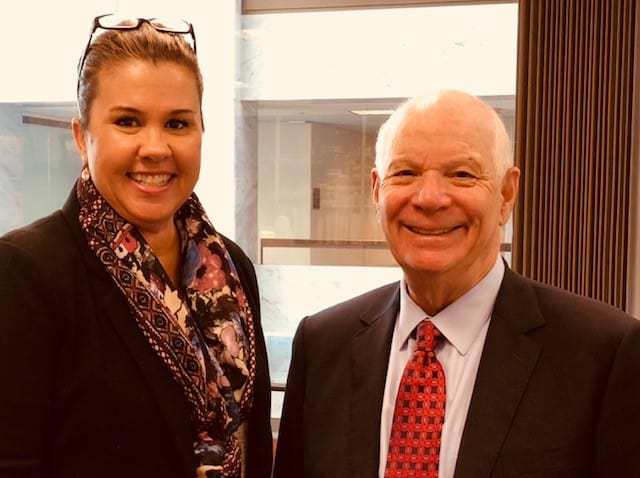 I got a quick picture with Senator Ben Cardin himself, and had warm and welcome receptions from all of the offices’ staff.  It was a fun, tiring, hectic, cold (!) day.