Last night we spent a couple hours in a small Korean Chicken & Beer pub watching the Japanese and Korean women’s hockey teams on TV.  There we met a pair of Zamboni drivers from Minnesota and Utah and got to do our favorite thing in the world:  Share our love of Asia with people that were so excited to be here.

Let me start at the beginning.  Working as an international court reporter and videographer team in Asia means that occasionally, schedule-wise, the stars align, and you can take advantage of some very exciting opportunities.  In this case, we set off to attend the Olympics!  We spent a frantic evening booking tickets, flights, an AirBnb, and transit, and the very next day we landed at Incheon Airport and hopped the train to PyeongChang! 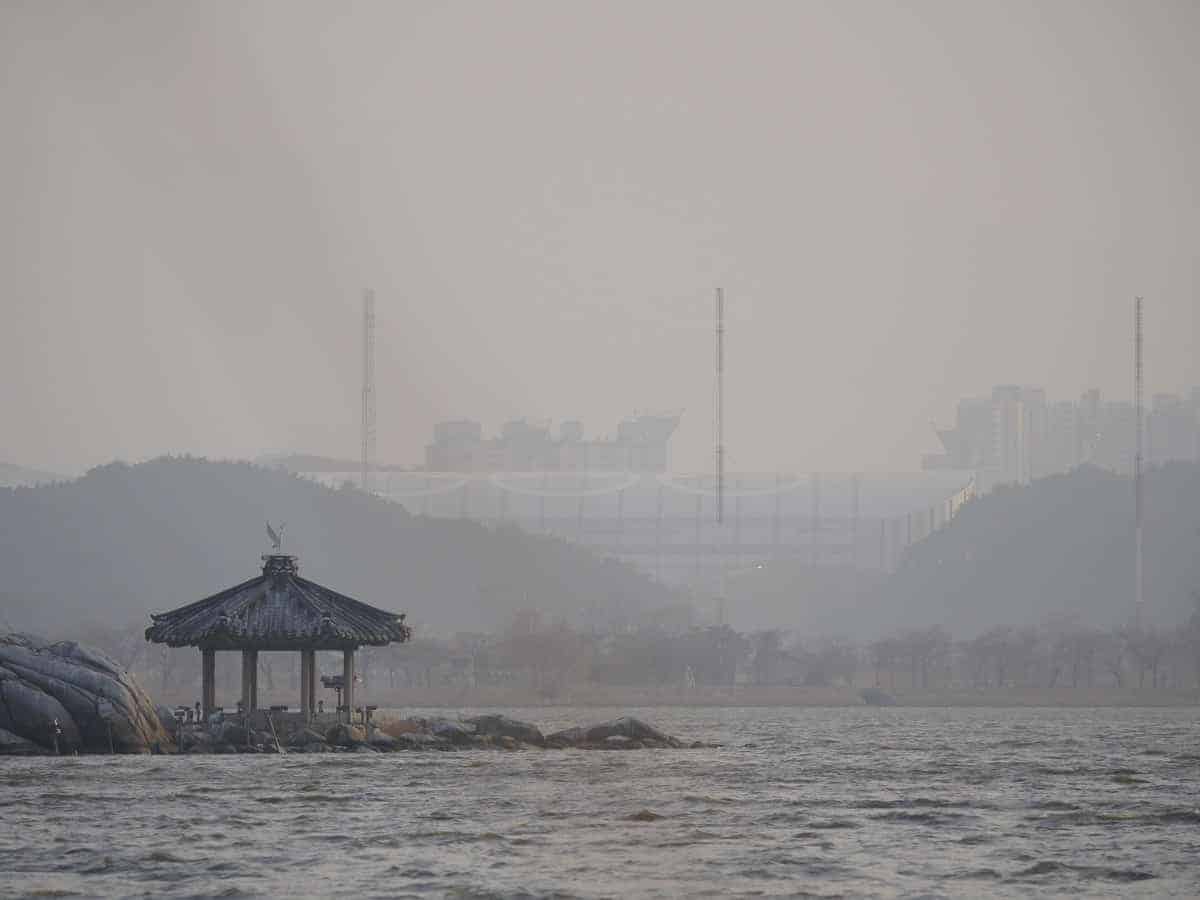 A view of Olympic Stadium from Gangneung – Photo by Trevor Price

Well, Gangneung!  The entire event is split into two areas.  The area that people see on TV is PyeongChang, and that is where all the mountain and outdoor events are happening.  Gangneung is a small city down on the coastline with gorgeous beaches that rival any we have ever seen.  We will most definitely be back here in the summertime!  All the ice arenas are in an area called the Olympic Coastal Cluster, and they are easily walkable from one building to the next, which is extremely convenient.  There is a stage set up where cultural shows are performed.  We were lucky enough to see a B-Boy group showing off some mind-blowing breakdancing routines, a singer performing Korean Trot music in the most gorgeous stage jacket I’ve ever seen (easily rivalling anything Don Cherry wore during Hockey Night in Canada), and a pair of ladies playing a string instrument that I believe is called a Gayageum.  The ladies played so beautifully that it brought tears to my eyes. 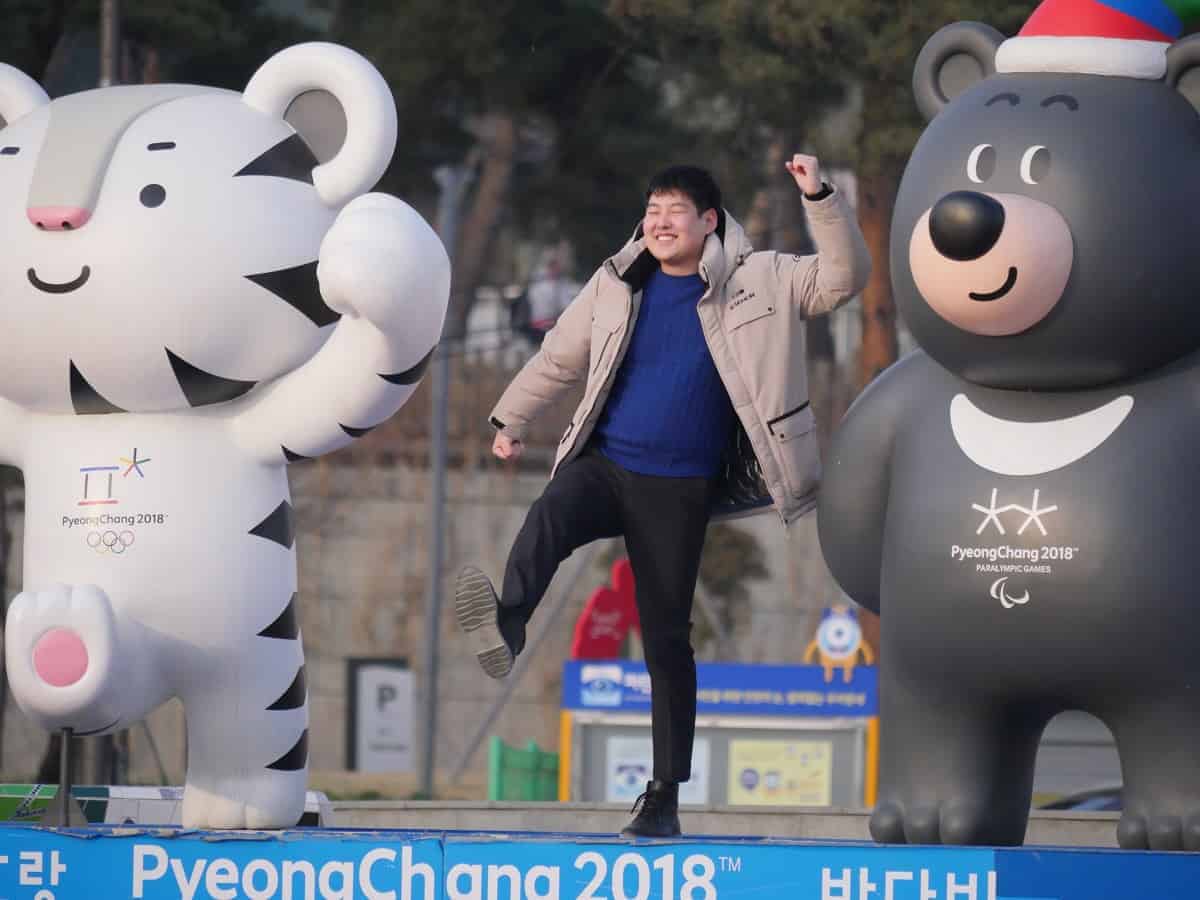 A stage at the 2018 Olympics – Photo by Trevor Price

The entire area is very well organized and cleanly laid out.  There are plenty of free shuttles to move you around the city.  Tons of information is available on the local culture, things to eat, and places to see.  It is clear that a lot of thought went into these games, and Korea is well-prepared!  The taxis are a little busy and the wait for them can sometimes be a bit, but the general excitement in the atmosphere means that you can use the time to chat with people while you wait in line.

The first night we saw a true bucket list checkmark event.  We watched the Canadian mixed doubles curling team win the gold medal against the Swiss, who were the world champions last year!  We expected a battle, but our Canadian team had a few lucky moments at the beginning and cruised to a pretty easy victory.  Around us in the stands were people from all over the world cheering on both teams.  Behind us was an Australian family whose father was providing excellent and knowledgeable curling commentary to everyone sneakily eavesdropping.  Right next to us was a young Korean family, and the two small children each had a flag for Switzerland, Canada, and Korea.  They excitedly cheered for both teams.  Later, our families back home told us they saw us on TV!

Mascots around the 2018 Olympics – Photo by Trevor Price

The second day was Valentine’s Day figure skating, and we finally got to see it live in person, a childhood dream.  We cheered for everyone equally because they were all so excellent, but we joined in with the Chinese couple next to us when their team had an incredible performance.  Later in the program after their appearance on the ice, the Japanese pairs team sat down to finish watching in the stands three seats away from us!

The city of Gangneung is very proud and so happy to welcome the world.  We have had many, many smiles and kind gestures.  The taxi drivers have practiced English phrases and are patient with our poor attempts at Korean.  The guides are excited to tell us about the area and the many things to see such as Anmok Beach and “coffee street,” a giant row of tons of coffee shops and roasteries representing the strong coffee culture in Korea (one of my personal faves), or the weekly Fire Art Festival on Gyeongpo Beach where they have dozens of gorgeous wooden sculptures that are burnt and then rebuilt!  We’ll miss that one I’m sad to say.  This whole experience has been an adventure we’ve happily shared with people from all around the world.

Parade at the 2018 Olympics – Photo by Trevor Price

Which brings us back to the small Korean pub.  In that tiny little chicken restaurant last night there were Koreans, Japanese, Europeans, and North Americans.  All of us were laughing, eating, watching the games, and sharing our stories.  We listened as the Zamboni drivers told us the stories of how they had been invited to Korea and their initial nervousness as neither had ever been outside of the States, much less across the ocean, and we beamed when they told us their experience mirrored ours.  We are all thrilled to be here together!