Travel Adventures: Food on the Go 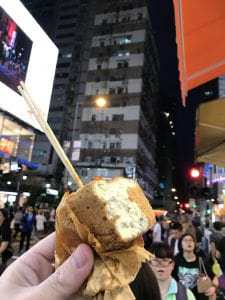 Every once in a while though, you run into a dish that requires an extraordinary amount of bravery or, as I’ve heard it described, stupidity.

What you are seeing in this picture is stinky tofu, and on a recent trip to Hong Kong, I ingested this crazy local street food dish.

For a very long time I’ve walked around Hong Kong and occasionally smelled something so revolting I just began calling it “Hong Kong Smell” and, I’ll be honest, I chalked it up to sewage.

So imagine my surprise when a group of people standing in line behind me at a food stall smelled just like it!  We got in a conversation and I learned that all this time it’s been stinky tofu that was the culprit.

Of course, moments later I was paying my 5HKD (about $1 USD) and taking a bite!

The verdict… not that bad!  I’ll be back for more next time I’m down in my favourite street food city.

On a related note, the Michelin Guide to Restaurants, if you’re not familiar with it, is a listing of the greatest restaurants in the world.  I have no idea how they decide, but recently they released a Michelin guide to Hong Kong street food.  I still have a few to visit, but maybe I’ll write my own reviews once I’ve finished them. 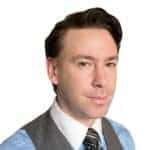