Doing business in Japan is a complex endeavor. While there are tremendous opportunities in Japan, there is also a highly nonverbal, deeply entrenched business etiquette. Being rude can cost business. Being rude can also be accidental. From business cards to business attire, there are many unspoken rules. We can’t cover all of it here, but we will give you a few fundamental pointers on Japanese Business Etiquette. 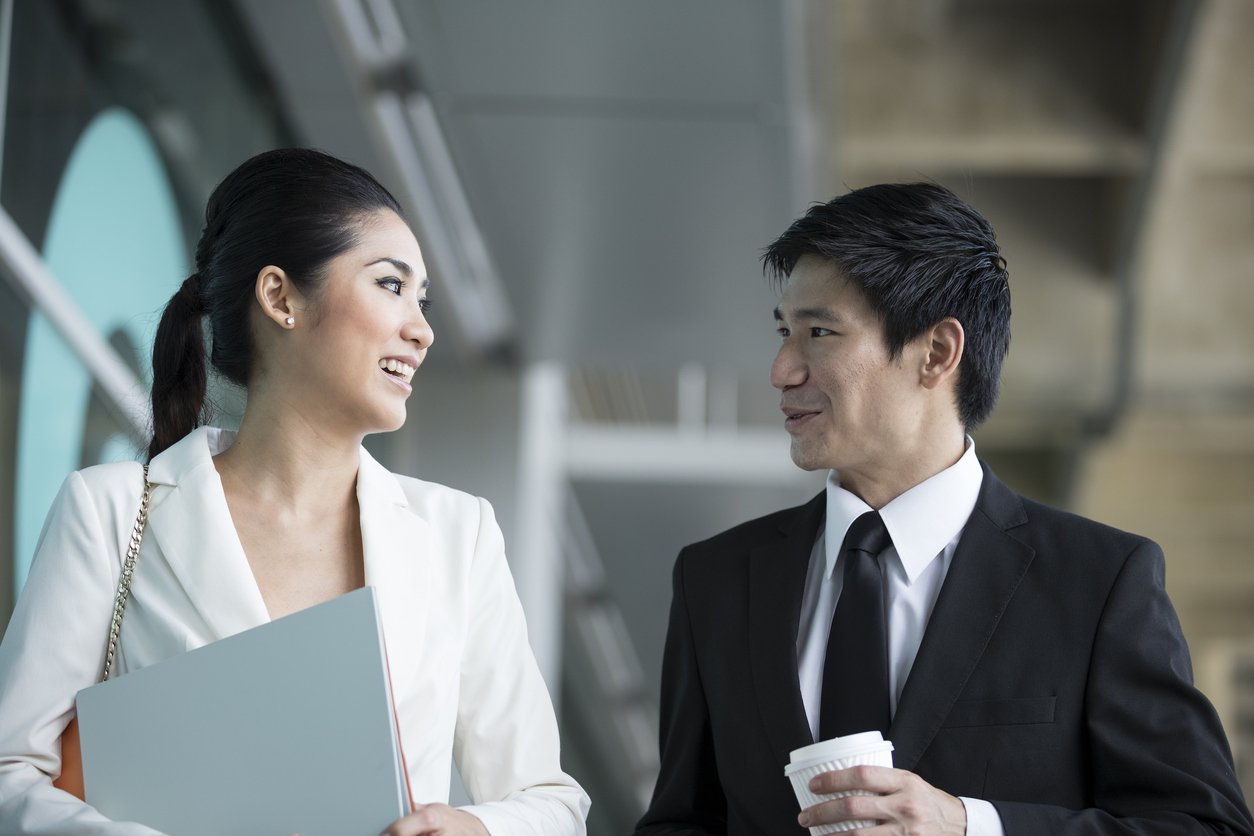 Luckily, Japanese business people understand that foreigners do not know all the rules of proper conduct. They will hold a foreigner to a lower standard than fellow Japanese business counterparts. Missteps will nonetheless be noticed. No matter how comfortable you feel, it’s wise to have a person who has lived in Japan help you one the ground. Planet Depos is an international court reporting agency. We are happy to help connect you to someone who will help with translation, logistics, and cultural insight.

Unlike other parts of Asia, Japanese businesspeople do not share personal information readily. While the first few meetings will be highly formal, they will soon lighten up. Do not mistake the relaxed formality as being close. Especially with higher level executives, Japanese businesspeople do not fully trust an outsider for many years. Continue to demonstrate good manners.

Japanese cultural values will influence how you are seen—and whether you can be trusted to do business with. Throughout Asia, there is a great deal invested in your personal reputation and how you appear to others. Remember wherever you travel that the casual, nonhierarchical approach that Americans often employ can be seen as quite rude.

Japanese cultural values and business are united. They value:

In keeping with these values, much of Japanese communication is indirect or nonverbal. For example, if you cannot use chopsticks, try or indicate non-verbally that you cannot. Do not ask for a fork. They will likely have one, but wait until they offer one to you. Because they are used to nonverbal communication, the Japanese pick up on these signals well.

Understand that these values also work together, resulting in a non-confrontational, face-saving character.

Saying No in Not-so-many Words

To avoid conflict, the Japanese (like much of Asian culture) will avoid saying no directly. However, they say no often in other ways, such as: 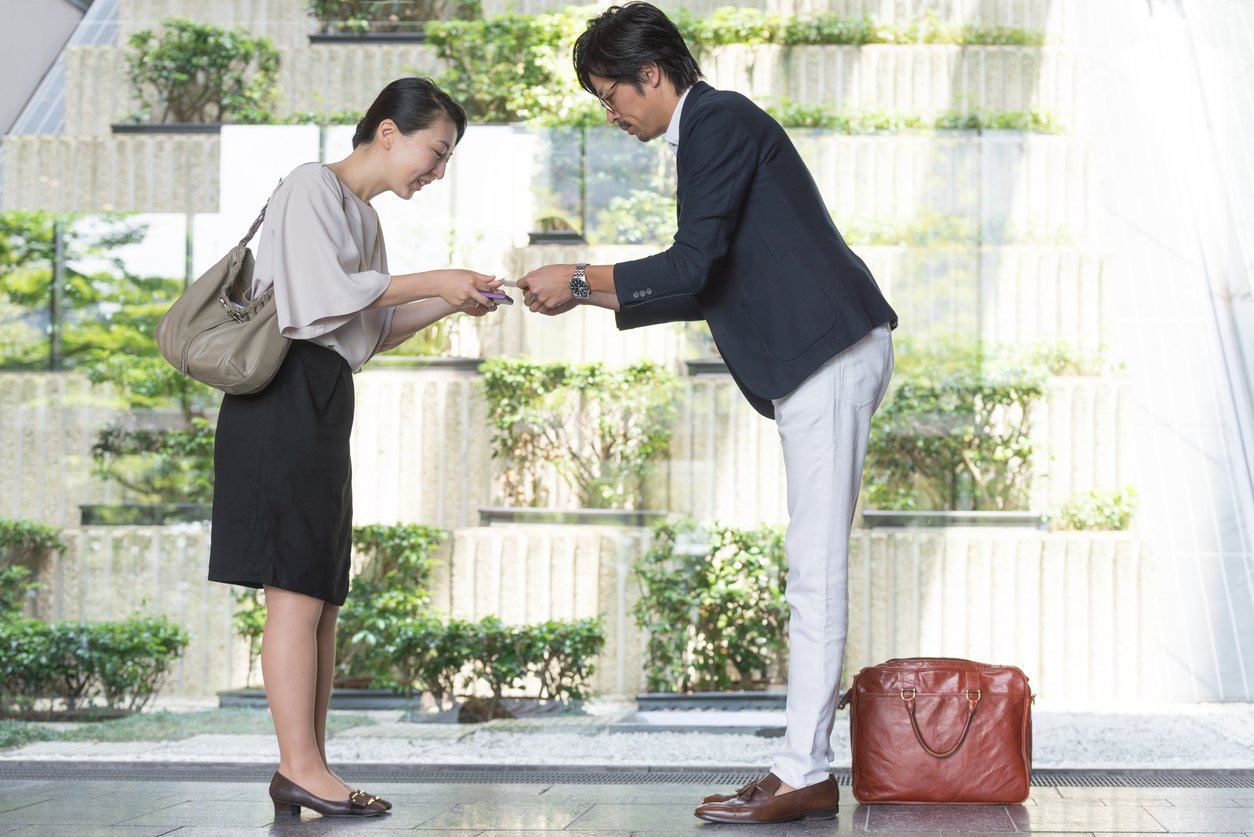 Business Cards in Japan are a Business-Must

If doing business in Japan, have a business card made that has English on one side and Japanese on the other. The card should have the same design elements and information in Japanese and English. For a week of business, you will want to have at least 100 business cards.

At the start of a meeting, business cards are exchanged. The highest-ranking person will begin the exchange. Give a business card to each person. Throughout Asia it is common, polite practice to give and receive business cards and gifts with both hands. The writing should face the receiver, Japanese side up.

Treat all business cards with utter respect. When receiving one, bow slightly and say thank you.

Do not fold, bend, write on, or shove a business card into a pocket.

Invest in a nice business card holder to show respect for the company you represent and the time of the business you are engaging with. 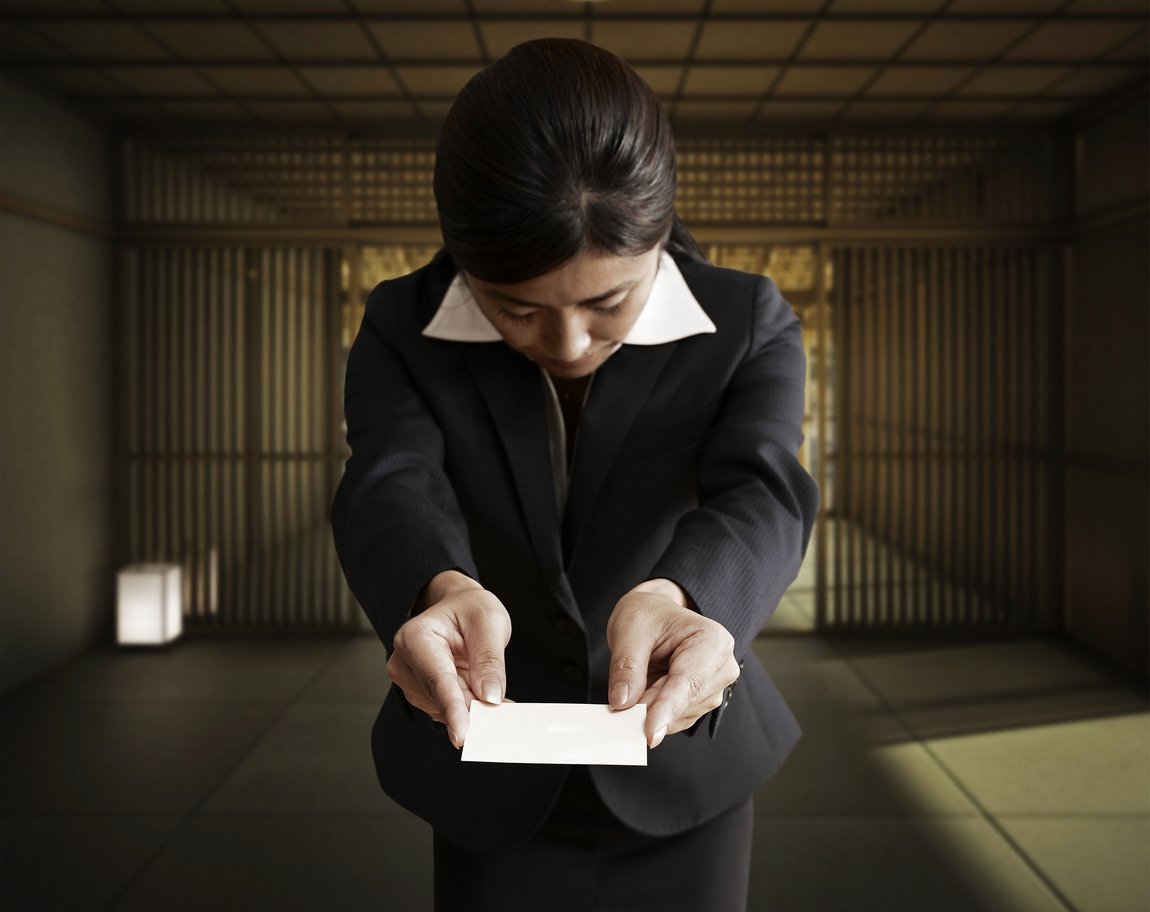 Wearing a black suit, white shirt, and black tie is funeral attire. A black suit without a black tie is fine, however. Choose conservative suit colors like navy, grey, and black. Do not wear loud or bright ties or tops.

Prime Minister Koizumi passed a regulation almost a decade ago allowing male government employees to forgo a tie. Since then, not everyone wears a tie, especially in hot summer months. But, it is still recommended that you wear a tie to business meetings to show respect.

Rules for Business Attire in Japan:

Take Off Your Coat

If wearing a coat over your blazer or suit, remove the overcoat and drape it over your arm before entering the building.

Women in the Japanese Workplace

Women are not as represented in the workplace, which is highly male-dominated. However, things are changing.

“As a significant portion of Japan’s population has been moving into retirement age, there has been a concerted effort to drive greater levels of female participation and advancement in the workforce. There’s even a term for it: ‘womenomics’. It’s actually part of a larger government economic revival strategy focused on leveraging the untapped female talent pool by doing things like encouraging corporations to publicize their voluntary diversity targets.” – Johnson & Johnson

Nonetheless, it is easier to be taken seriously as a businesswoman in Japan if you follow these tips for business attire:

Note that many Japanese companies have strict dress codes. Female employees are frequently not allowed to wear: jewelry, skirts above the knee, or high heels.

Face-to-face business meetings are an essential part of doing business in Japan. Often, business will not go forward through email and phone alone.

Whenever doing business in Japan, be courteous and wait to sit and speak until you have been addressed. This will show great respect and avoid missteps. 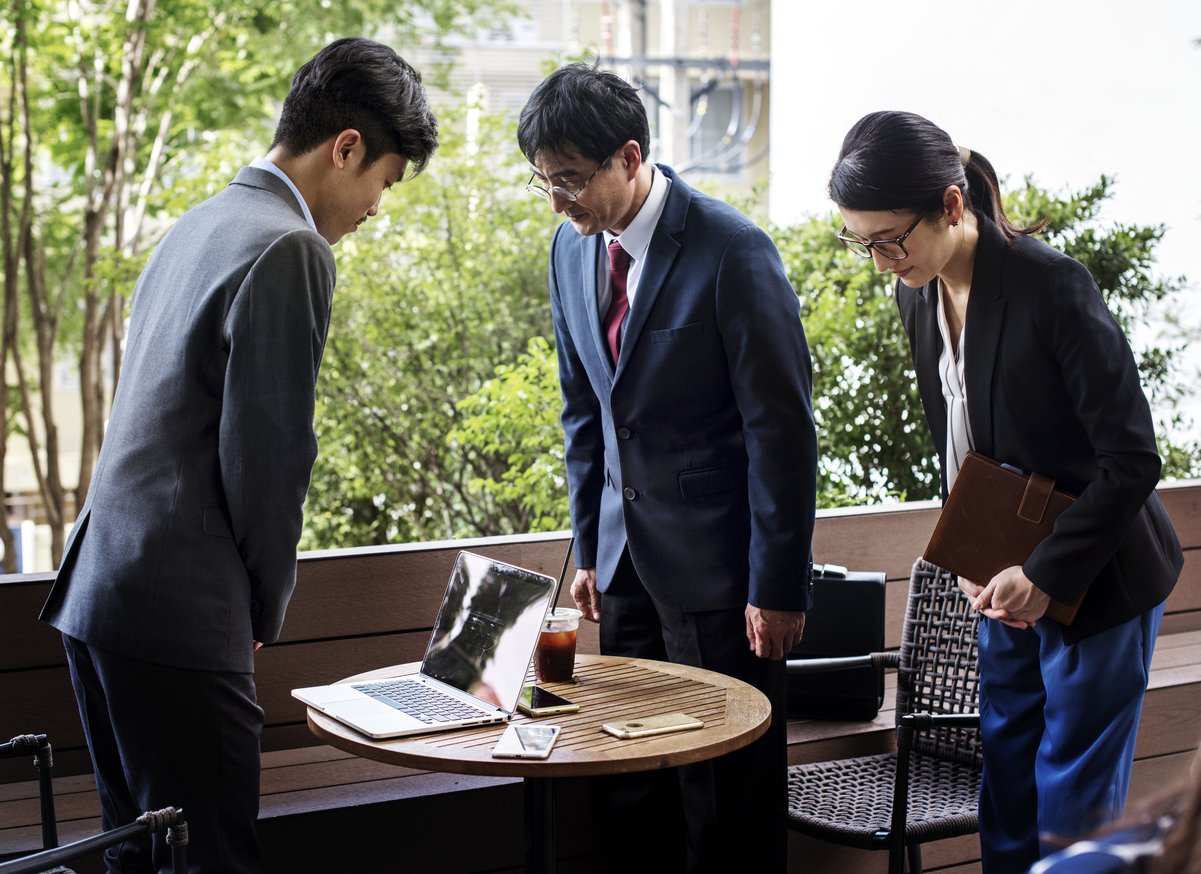 Timeliness is incredibly important in Japan. Unlike some Asian countries, where socializing will require padding in extra time, schedules are very tight in Japan. If a meeting runs from 2pm to 3pm, it will promptly start and end at those times. Plan your schedule and presentations well.

Having an interpreter shows respect and consideration to the Japanese people you are doing business with.

All materials should be translated into Japanese.

Having a translator is helpful if you do not have a native speaker in your team. (Planet Depos has offices in Japan and can provide Japanese translators and assistance!)

Make sure that, like business cards, you have copies of all materials for each person at the meeting. Come prepared with a few extra copies.

How to Bow in Japan

People in Japan do not generally shake hands. If someone does shake your hand, use a soft grip. 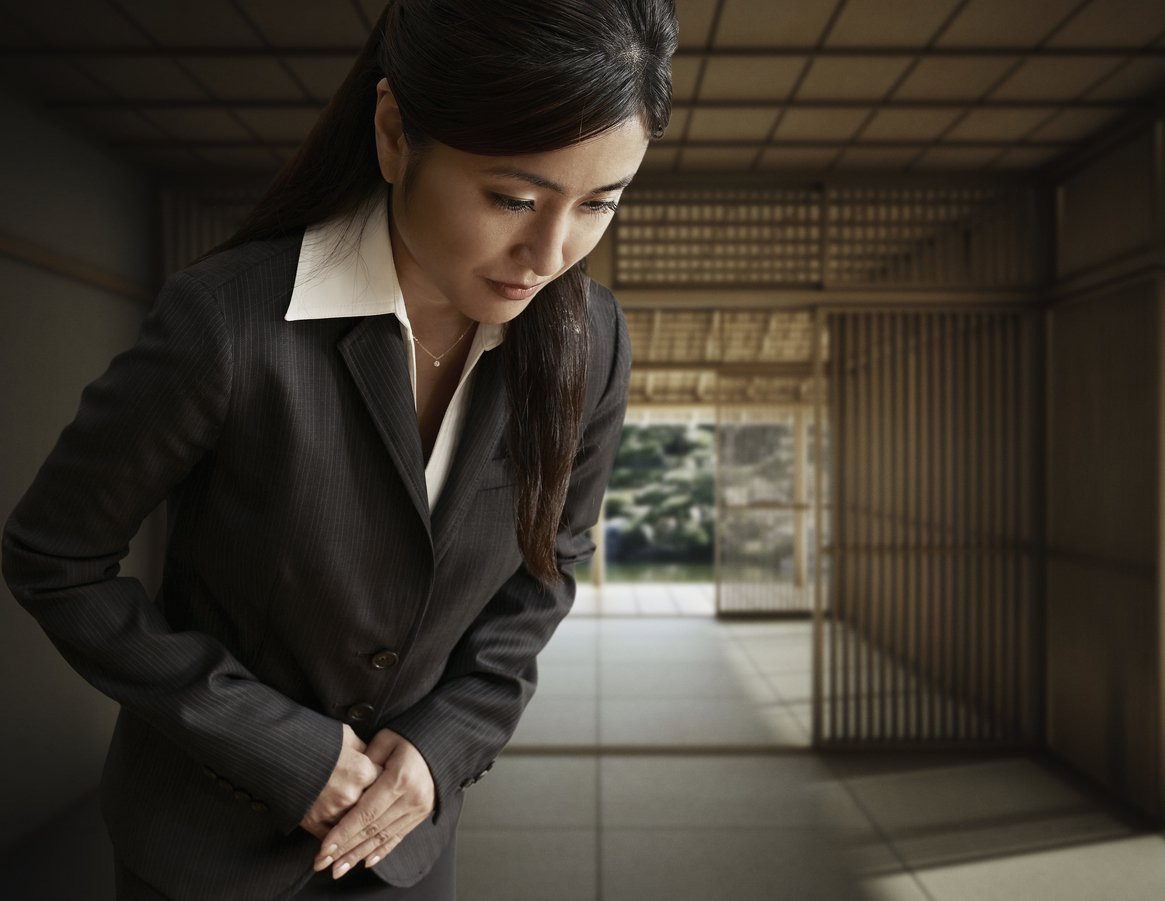 There are three kinds of bowing in Japan based on the occasion:

Eshaku is a light bow, only a few degrees (about 15 degrees). It’s used as a more casual greeting or small apology.

Keirei is a mid-bow (about 30 degrees) that you will use most often to show respect in business contexts. Use this bow upon entering or leaving a room or meeting.

Sakeirei is a deep bow (about 45 degrees) that is used for thanks, an apology, or special/ceremonial occasions.

Rank is very important in Japan. Wait to be seated to avoid embarrassing situations. Generally, the highest-ranking people and guests sit near the head or center of the table. People are seated in descending rank with the lowest ranks farthest away from the highest.

Entering a room or an elevator is also done by rank. The lowest ranking person enters last, holding the door or standing by the elevator buttons. Always allow senior people to enter first.

Knocking twice is for checking if a bathroom stall is occupied. It’s customary to knock three times on any other door.

It’s likely that you will receive a gift if you spend time doing business in Japan. It is customary to politely refuse the gift several times before accepting.